Judas in the Gospels

Judas Iscariot, the son of Simon (Jhn13:2), was one of the twelve disciples chosen by the Lord Christ. He was called “Iscariot”, which means “a man from Kerioth” referring to his city (Josh15:25) or it may means “a murderer”. This name is used to differentiate him from Judas, one of the Lord’s brothers (Matt13:55; MK6:3) who was one of the disciples, and was called “Judas, not Iscariot” (Jhn14:22) and “Judas the brother of James” (Lk16:6). Judas Iscariot witnessed the marvelous miracles of Christ, which proves His divinity, heard His spiritual teachings, and listened to His responses to the Scribes, Pharisees, Sadducees, and Lawyers who tried to entangle Christ in His talk. Judas watched the way Christ dealt with His beloved and enemies, followers and disbelievers, repentant sinners and those who trusted in themselves that they are righteous. It was clear to Judas the meekness and humbleness of Christ, beside all other virtues in its perfection.

The Good Master chose Judas to be one of His disciples, in spite of His previous knowledge about Judas’ wicked nature, as Christ said, “Did I not choose you, the twelve, and one of you is a devil? He spoke of Judas Iscariot, the son of Simon, for it was he who would betray Him, being one of the twelve” (Jhn6:70,71). Like the other disciples, He sent Judas to preach; Jesus gave him the authority to cast out demons and to heal the sick (Matt 10:1). Jesus also gave him the special responsibility of carrying the donation box, spending from it for the needy, and buying the disciples’ necessities as for the Passover feast (Jhn13:29). Although Jesus knew that Judas did not care about the needy because he was a thief (Jhn12:6), Jesus tried to let Judas get rid of his greed and love of money. Christ also did not reveal Judas’ crimes; He didn’t expose him before the other disciples, He didn’t withdraw the box from him or cancel his responsibility, but he kept this responsibility till his death. Jesus did not reject Judas’ discipleship even after agreeing to betray Him, but He let him to attend their gatherings, and to know His news as one of the near by. It was obvious that Judas was very near to Christ on the table that he was able to dip his hand with Him in the same dish (Matt26:23). Out of His humility, the Lord washed Judas’ feet in love, equitable to the other disciples.

The Cleansing of the Temple

Driving out all who bought and sold

This shows us that Christ who is meek, was also firm. This event shows us how Christ had a perfect and balanced personality, which combined all the virtues together. For, He being gentle and lowly in heart (Mt 11:29) can become very firm when the circumstances call for it, as it happened on that day… He was firm in a way that they have never seen before, and His firmness was combined with teaching, as He said, “It is written ‘My house shall be called a house of prayer.’” This way He corrected what was wrong.

Prophecies Of The Holy Week 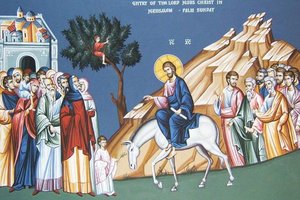 On Palm Sunday, our Lord Jesus Christ entered Jerusalem as a King. Since He was not competing with Caesar, He didn’t encounter any resistance from the Romans. The problems rose internally from His people, the Jewish leaders. There was a problem in understanding the nature of His kingdom.

The nature of the Lord’s kingdom

The Lord Christ accepted to enter Jerusalem as a King. His kingdom was near by. The day, when He conquers Satan’s kingdom by His crucifixion was close. The Lord wanted a spiritual kingdom, but the Jews wanted an earthly kingdom. He wanted to establish a spiritual kingdom based on love. The Jews wanted a kingdom like the other earthly kingdoms, based on authority of the ruler like Samson or Gideon or Joshua. They also wanted the external appearance of force expressed in armed forces. They never thought of a Godly kingdom. They shouted “Hosanna the Son of David”, that is to say, “O Son of David, save us”. They requested a son of David as an heir to the throne and crown of David, not the Son of God. 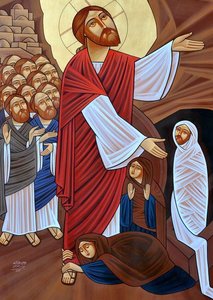 I have the keys of Hades and of death

Jesus Christ prepared the hearts and minds of the disciples, the crowd, and Mary and Martha to accept the truth of resurrection; He strengthened their faith in Him as the giver of life, and the source of resurrection. Everyone saw Him standing in front of the tomb, in which Lazarus was buried for four days, they saw Him raising His hands to the heaven, holding the keys to Hades and of death (Rev 1:18) and they heard Him talking to the Father. They all felt that the act Jesus about to do with great authority is for the glorification of the Father, so that the Son would be glorified through Him... Jesus then called with a great voice saying, "Lazarus, come forth" (John 11:43) So the dead came out with his hands and feet wrapped and his face covered. Truly, the abyss heard the voice of the Lord and trembled, "The voice of the LORD is powerful; The voice of the LORD is full of majesty. The voice of the LORD shakes the wilderness; The LORD shakes the Wilderness of Kadesh." (Ps 29:4-8) the abyss heard and its forces released its captive.

Jesus awoke Lazarus from his deep sleep with His great voice (John 11:11) disregarding death, as He is Life. It is a picture of what Paul described "For the Lord Himself will descend from heaven with a shout, with the voice of an archangel, and with the trumpet of God. And the dead in Christ will rise first." (1 Ths 4:16)