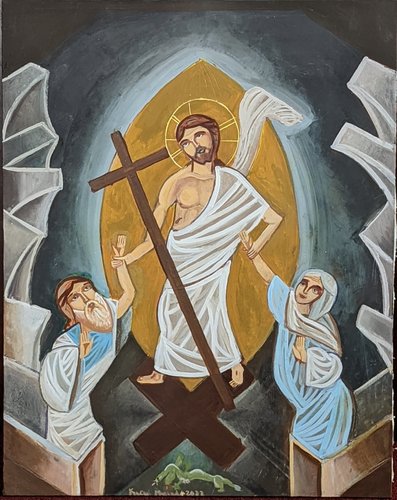 The power of His Resurrection was declared by the arrangements of events that happened before His burial. One of these signs, which declared the power of His Resurrection is the earthquake, which took place when the angel descended from heaven to remove the great stone from the door of the tomb. (Mt. 28:2) As there was an earthquake at the time of His death upon the cross, (Mt. 27:51) there was another one which took place precisely at the time of His Resurrection to prove that this same One who died also rose again. In other words, the Lord quaked the earth during His death, to prove that He didn’t submit Himself to death out of weakness, but out of His love and compassion over us, because He is the Almighty God (Pantokrator) who expressed His might by this quake during His death and Resurrection. (Bishop Boulos of Bosh)

All the armed soldiers shook for fear and became like dead men as the earth quaked and the angel descended from heaven to roll back the stone before them. (Mt. 28:2-4) In this matter St. Cyril of Jerusalem reflected, “The angel, who removed the stone, said to the women, ‘do not be afraid’ and not to the soldiers, because they should be afraid when they realized the power of His Resurrection, and then they will witness saying, “Truly this was the Son of God,” as the Centurion. (Mt. 27:54)

The tomb sealed by the great stone – sealed by the Chief Priests (Mt. 27:66) – cannot prevent the Resurrection; instead, it substantiates it, again dispelling the claim that Jesus’ body was stolen. St. John Chrysostom held, “If the soldiers were the only people who sealed the stone, it was easy for the Chief Priests to say that the soldiers agreed about the stealing of the body and accordingly, the disciples created the idea of His resurrection.”

Inside this empty tomb, there were the linen cloths, lying in its arrangement but without the body of Christ, which also proves His Resurrection. Grave robbers look for expensive cloths and not dead bodies. On the other hand, if the disciples stole the body, they would have taken it wrapped to avoid wasting time in both unwrapping the body and folding the cloths, while the soldiers were outside. It was impossible for unarmed and frightened disciples to do this. Also, what is the wisdom behind taking the body naked, if they were looking to honor their Master by proclaiming His Resurrection?

There are many reasons for Him to leave the cloths behind:

Even the spices, prepared by Joseph and Nicodemus to be put on the body of Christ as an expression of their great love, also proves the power of His Resurrection. St. Peter of Sedment said, “It revealed the power of His Resurrection as He rose and got up from it although the materials were adhesive and stuck to the body. This made His Resurrection a great sign, because the clothes were arranged in its places while the handkerchief laid by itself, though this separation was impossible.” The scene of the empty arranged clothes is just enough to lead those who saw it to believe strongly in His Resurrection. This is really what happened with St. John. (Jn. 20:8)

He appeared after His Resurrection with the mighty power that overcame death and its power, while beforehand, He appeared in the shape of weakness during crucifixion. These wounds were enough to lead any person to believe in His Resurrection after death. (Jn. 20:27)

With all these strong proofs of His Resurrection, and the testimony of the guards themselves, (Mt. 28:11) the Chief Priests still refused to believe; instead, they gave a large sum of money to the guards to say that His disciples came at night and stole Him away while they were sleeping. (Mt. 28:12,13) Is it really possible to those guards to sleep during their work to guard the tomb? How did they know the identity of the robbers if they were sleeping? On the other hand, how did these disarmed disciples overcome their fear and weakness and undertake this risky task right in the presence of those armed guards? It is possible that the sleeping guards did not wake up from the sound of the great stone moving? These Chief Priests are an example to those who refuse to believe despite strong evidence, and instead convince themselves with lies and circumstantial evidence fulfilling their one personal interest, not even realizing the magnitude of their loss.

It is the power of the Resurrection, which destroyed all obstacles. The empty tomb and the Good News of the Risen Christ enabled the disciples to see and touch Him (Mt. 28:9,10) and accept the reality of His Resurrection and its feeling its efficacy in our life. It was the first time the disciples and the women heard about Resurrection, while Christ our Lord was not present with them. When they saw Him, they believed. This was the case in previous events in Christ’s ministry where they saw Him raising the dead by Himself – without Christ, there is no Resurrection.

This resurrection strengthened them and encouraged them to evangelize the Risen Christ without fear even to the point of death.