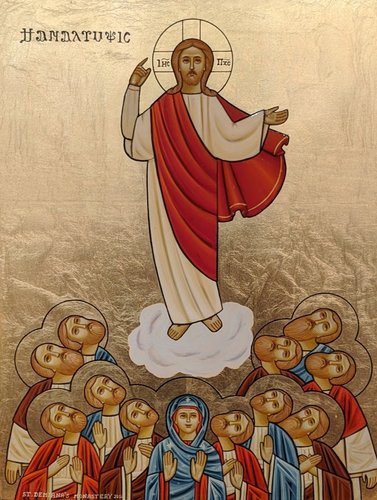 He Ascended to heaven by His own power, with glory, as St. Paul said, “And without controversy great is the mystery of godliness: God was manifested in the flesh, Justified in the Spirit, Seen by angels, Preached among the Gentiles, Believed on in the world, Received up in glory.” (1 Tim. 3:16) This glory was mentioned in the prophecies… so, for example the psalmist says, “God has gone up with a shout, The LORD with the sound of a trumpet.” (Ps. 47:5)

The Lord pointed to His ascension, with its different aspects, many times while He was still in the flesh… He showed that it is only He who can ascend to heaven because He descended from Heaven, and He fills the Heaven and earth and everything in between, so He explained to Nicodemus, “No one has ascended to heaven but He who came down from heaven, that is, the Son of Man who is in heaven.” (John 3:13) And He told His disciples that He will stay with them for a short period in His final speech as He said, “Little children, I shall be with you a little while longer. You will seek Me; and as I said to the Jews, ‘Where I am going, you cannot come,’ so now I say to you.” (John 13:33) Then He explained the reason of His Ascension when He said, “In My Father's house are many mansions; if it were not so, I would have told you. I go to prepare a place for you. And if I go and prepare a place for you, I will come again and receive you to Myself; that where I am, there you may be also.” (John 14:2,3) “It is to your advantage that I go away; for if I do not go away, the Helper will not come to you; but if I depart, I will send Him to you.” (John 16:7) He showed also that He is going to the Father when He said, “If you loved Me, you would rejoice because I said, ‘I am going to the Father,’ for My Father is greater than I.” (John 14:28) “I came forth from the Father and have come into the world. Again, I leave the world and go to the Father.” (John 16:28) That’s what He also said to Mary Magdalene after His resurrection, “Go to My brethren and say to them, ‘I am ascending to My Father and your Father, and to My God and your God.’” (John 20:17) And He emphasized His return to the Father when He said, “But now I go away to Him who sent Me.” (John 16:5)

He ascended after He proved His resurrection and its power and glory by appearing alive after the suffering, the crucifixion, the torture, and death as “He also presented Himself alive after His suffering by many infallible proofs, being seen by them during forty days and speaking of the things pertaining to the kingdom of God.” (Acts 1:3)

He proved His resurrection with infallible proofs, as He appeared many times to individuals and groups. He removed all their doubts when He showed them His wounds, and allowed Thomas to touch them, who when saw them, glorified Him saying, “My Lord and My God.” (John 20:28), and before that He Allowed Mary Magdalene and the other Mary to hold Him by the feet and worship Him. (Mat. 28:9) And when He found that the disciples were afraid, thinking He was a ghost, He ate and drank with them. This was the proof that St. Peter used to show that He rose from the dead, “Him God raised up on the third day, and showed Him openly, not to all the people, but to witnesses chosen before by God, even to us who ate and drank with Him after He arose from the dead.” (Acts 10:40,41)

St. John mentions another piece of evidence of His resurrection: His sudden appearance at the Sea of Tiberius to seven of the disciples after a fishing trip in which they did not catch any fish, and when He commanded them to cast the net, specifying the right side of the ship, they caught a multitude of fish, (John 21:1-12) and when they came to the shore they found that He prepared for them a fire, and fish and bread to eat, and He ate with them. May be this miracle reminded them of the same miracle that He did with them at the beginning of His ministry, when He called them to be fishers of men. (Mat. 4:18:22)

He showed by His resurrection and apparitions that He has the authority to raise Himself from the dead as He said, “I have power to lay it down, and I have power to take it again.” (John 10:18) And hence, He has the authority to raise from the dead any one who believes in Him as He said, “He who believes in Me, though he may die, he shall live. And whoever lives and believes in Me shall never die.” (John 11:26,26) “Because I live, you will live also.” (John 14:19) And in addition to that it is a support for our faith that we worship a living God, who dwells in our midst all the days and unto the end of ages. (Mat. 28:20)

His ascension was on the fortieth day after His resurrection (Acts 1:3). During these forty days He opened their minds to understand all that was written about Him in the prophesies, (Lk. 24:44-49) and He explained all the symbols that speak about Him in the Old Testament, in addition to all the issues related to the rites and beliefs of the church… or as St. Luke sums it up saying that He was “speaking of the things pertaining to the kingdom of God.” (Acts 1:3)

In His final speech, Christ promised to send to them the Holy Spirit after His ascension to heaven (John 14-16) but He did not specify a date, He commanded them to wait, “Behold, I send the Promise of My Father upon you; but tarry in the city of Jerusalem until you are endued with power from on high.” (Lk. 24:49) He wanted them to be in prayer, and be prepared to receive the Holy Spirit, and that’s what happened in the period between the ascension and the Pentecost as St. Luke describes, “These all continued with one accord in prayer and supplication, with the women and Mary the mother of Jesus, and with His brothers.” (Acts 1:14)

As His ascension to heaven was with glory, also His second coming will be in great glory on the clouds, surrounded by angles and saints, as the two angles told the disciples (Acts 1:11) and that was what Jesus told them before His sufferings, and were documented by the four evangelists (Mat. 24:30; Mk. 13:26; Lk. 21:27) and John quoted Him saying, “And if I go and prepare a place for you, I will come again and receive you to Myself.” (John 14:3) St. Paul added this fact also, saying, “For the Lord Himself will descend from heaven with a shout, with the voice of an archangel, and with the trumpet of God. And the dead in Christ will rise first.” (1 Th. 4:16) And St. John reiterated the same fact in his book of revelation saying, “Behold, He is coming with clouds, and every eye will see Him, even they who pierced Him. And all the tribes of the earth will mourn because of Him.” (Rev 1:7)