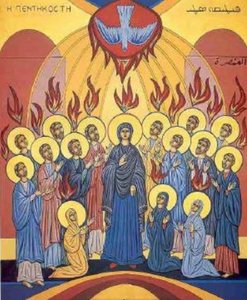 In Pentecost, the Holy Spirit dwelt on the disciples as tongues of fire, representing purification of the heart and inflaming it with divine love.

Our Lord Jesus came, as He said, to bring fire on earth, and, “How I wish it were already kindled!” (Lk. 12:49) He was talking about the Holy Spirit, the fire that He kindled in every earthly heart to sanctify, purify and inflame it with the fire of love, and to give it spiritual rapture so that it becomes a heavenly heart … a divine throne, similar to the fiery Cherubic chariot.

Christ’s Resurrection and Ours 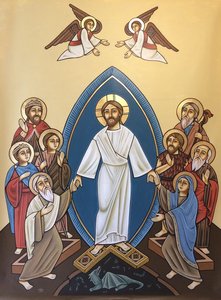 Isaiah prophesied that death would be trampled under Christ’s feet by saying, “He will swallow up death forever, and the Lord God will wipe away tears from all faces; the rebuke of His people He will take away from all the earth; for the Lord has spoken” (Is. 25:8). It is well known that sin is a reproach to any people (Prov. 14:34). St. Paul invoked this prophecy by saying, “For as in Adam all die, even so in Christ all shall be made alive” (1Cor. 15:22). That is, all men die like Adam because of the corrupted nature inherited from him, but we receive a new life, through Christ, in our bodies since our life in Christ leads us to our blessed resurrection. Through Christ’s resurrection, we are able to sing joyfully the song of victory, “O death, where is your sting? O Hades, where is your victory?” (1 Cor. 15:55), the same song foretold by the prophet Hosea about death which lost its power by the Savior: “I will ransom them from the power of the grave; I will redeem them from death. O Death, I will be your plagues! O grave, I will be your destruction!” (Hos 13:14).

If Christ is not risen, we will not rise; eternal death will be the end of our life, and we will be of all men the most pitiable (1Cor 15:19). If the hope we have in Christ is ended by this life, we’ll be deceived because we are suffering the afflictions of this life without legitimate hope in the life to come.

Christ’s resurrection is the perfect assurance for our resurrection, as St. Paul said, “But now Christ is risen from the dead, and has become the firstfruits of those who have fallen asleep” (1 Cor 15:20). He proved the fact of Christ’s resurrection without a doubt, which does not need any further proofs (1Cor 15:1-58), but gives hope and joy to the believers in eternal life. St. Paul declared that Christ, through His resurrection, became the firstfruits, meaning others who have “fallen asleep” will rise from the dead as well. 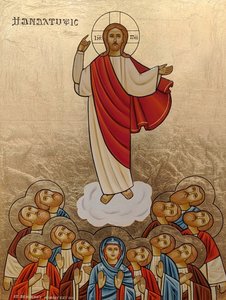 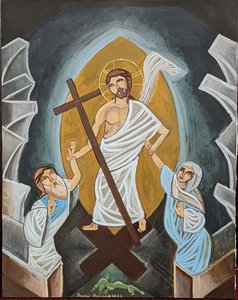 The resurrection of the Lord Jesus is one of the most important Christian doctrines, upon which many other doctrines depend. It is a great miracle and a unique event, like the virginal birth of Christ. Such event hasn’t happened in history and will not happen in the future: a person rising from the dead by His own will and power as He foretold prior to his death.

He rose because He is God, and because He is God He rose by His own authority since it is obvious that the dead person is normally not able to rise by himself. It proves His divinity since death is a consequence of sin and its punishment, while Christ alone is holy, pure, perfect and sinless; therefore death has no power over Him. Therefore, since He died voluntary and willingly, for our salvation, He also rose by His will and authority. St. Paul emphasized this fact by saying, “… and declared to be the Son of God with power, according to the Spirit of holiness, by the resurrection from the dead.” (Rom 1:4)