Symbols of the Holy Spirit

At the beginning of creation, the role of the Holy Spirit is clear, "… and the Spirit of God was hovering over the face of waters" (Gen1:2) as a fluttering dove.

The Holy Spirit also appears as a dove proclaiming peace at the end of the flood, "The dove came to him in the evening, and behold, a freshly plucked olive leaf in her mouth; and Noah knew that the waters had receded from the earth" (Gen8:11).

The Significance of Peace

It is a condition of freedom from disturbance, whether outwardly, as of a nation from war or enemies, or inwardly, within man’s heart. The Hebrew word is shalom meaning, primarily, “soundness,” “health,” but coming also to signify “prosperity,” well-being in general, all good in relation to both man and God.

Shalom was the common friendly greeting, used in asking after the health of anyone; also in farewells.

Peace from enemies (implying prosperity) was the great desire of the nation and was the gift of God to the people if they walked in His ways.

Inward peace was the portion of the righteous who trusted in God.

In the New Testament, where eirene has much the same meaning and usage as shalom (for which it is employed in the Septuagint).

Blessed are the Poor in Spirit

People attribute the source of happiness to different things. The Romans, for example, thought it could be found in authority, wealth, glory, and grandiosity. They were sure that it couldn’t be found in being poor in spirit. The Jews also miscalculated and sought after their freedom of slavery from the Romans, believing that it was the road to happiness. They too couldn’t believe that happiness is being poor in spirit.

Let us see how others perceived blessings. Blessedness, from Abraham’s point of view, meant, a child, land, cattle... etc. The Old Testament promised materialistic blessings. In the book of Exodus, the Lord said, “I have come down to deliver them out of the hand of the Egyptians, and to bring them up from that land to a good and large land, to a land flowing with milk and honey” (Exud3:8). The same in the book of Deuteronomy, “The Lord will command the blessing on you in your storehouses and in all to which you set your hand and He will bless you in the land which the Lord your God is giving to you” (Deut28:8).

Christ our Lord tells us come to Me and I will open to you the doors of joy, happiness and blessing. As we know, the Gospel is the joyful message, the Good tidings, as the Angel told the Shepherds saying, “Do not be afraid, for behold I bring you good tidings of great joy which will be to all people” (Lk2:10).

Our Lord Jesus sat down on the mountain side to explain the spiritual importance of poorness in spirit. For those who seek it, blessings and happiness shall be their reward. 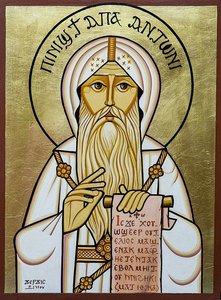 Most of what is known about the life of Anthony comes from the Life of Anthony, written in Greek around 360 by St. Athanasius of Alexandria. Sometime before 374, it was translated into Latin by Evagrius of Antioch. The Latin translation helped to spread the concept of monasticism, particularly in Western Europe.

This righteous man was born in the year 251 A.D. in the city of Qimn El-Arouse, Egypt to wealthy landowner Christian parents who loved the church and the poor. They raised him up in fear of the Lord. When he was twenty years old, his parents departed, and he had to take care of his little sister.

Once, he entered the church and heard the words of the Lord Christ in the Gospel, "If you want to be perfect, go, sell what you have and give to the poor, and you will have treasures in heaven; and come, follow Me." (Matthew 19:21) He returned to his house, decided to fulfill this commandment and considered it directed to him personally. He gave his wealth to the poor and needy, reserving a little however for his sister's sake. And again as he went into the church, hearing the Lord say in the Gospel, “be not anxious for the morrow,” he could stay no longer, but went out and gave those things also to the poor. Having committed his sister to known and faithful virgins to be brought up, he henceforth devoted himself outside his house to discipline, taking heed to himself and training himself with patience.

At that time, monasticism had not yet been established. All those who wanted to live a solitary life went and lived on the outskirts of the city. This was what St. Anthony did as he dwelt alone, worshiping and living an ascetic life. 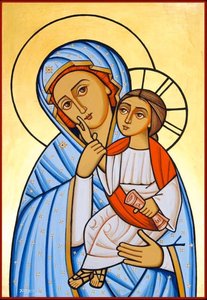 Joachim and Hannah, his wife, were both pious from the house of David (Luke 1:27) of the tribe of Judah. Both were regularly worshiping, and well advanced in years with no child. Archangel Gabriel appeared in a dream to Joachim, announcing that his wife will have a child who will please his heart. Hannah believed this vision when she heard it, and this vision was fulfilled by the birth of St. Mary. As a devoted virgin, she entered the temple at the age of three to live the life of ministry, devotion and worship among the other devotees at the women’s court. She lost her parents before leaving the temple at the age of 14 when the Lord chose her to be the mother of the Word incarnate. She was betrothed to St. Joseph, since it was not allowed to stay at the temple after this age.

The Lord blessed them with another daughter afterwards, and they called her Mary, like her sister who became a devotee for the temple. This Mary became the wife of Clopas or Alphaeus (John 19:25). She is also the mother of James, Joses, Judas, Simon and their sisters (Mark 6:1-3) who were called the brothers of Jesus. James and his brother Judas (Judas1:1), whose surname is Labbaeus or Thaddaeus (Luke 6:13-16; Matthew 10:3; Acts 1:13) were among Jesus’ disciples.