The Baptist and the Christ 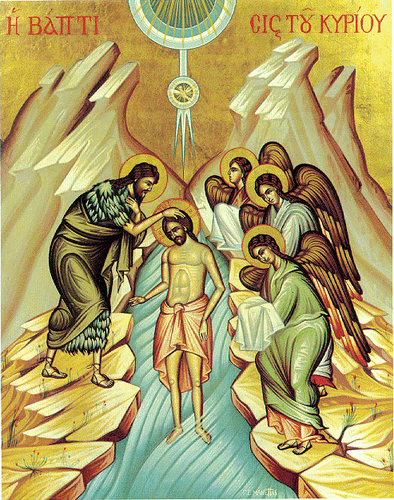 John the Baptist is an intriguing person. He is the last prophet and he is the first one crying in the New Testament. He is the greatest among those born of women. But he who is least, is greater than he, a sign to Jesus Christ who in the flesh is six months younger than John the Baptist (Matthew 11:11). The son of the priest, but he never practiced his priesthood in the temple. He is the only prophet about whose service prophecies were written (Isaiah 40:3-5; Malachi 3:1; 4:5) due to the importance of his role.

This voice crying in the wilderness had to come before the Christ who does not cry or shout and whom no one in the streets heard him. He is the connection between the Old and New Testament. He was the only prophet who saw the fulfillment of his prophecy of Our Christ. His final task was to witness to the true light. “There was a man sent from God whose name was John. This man came for a witness to bear witness of the light, that all through him might believe” (John 1:6-7). For this reason, his role was not to prepare the minds by explaining old commandments, but to prepare hearts to see the true light and recognize it.

St. Ambrosious says, “Many regard John the Baptist as a symbol to the law, it can rebuke sin, but not forgive it."

The Meaning of Repentance

The Baptist was preaching a baptism for repentance. He was declaring the Word of God as it is. He lived what he preached, thus, his words were effective.

What is the meaning of repentance that John was preaching?

The Baptism of Repentance

With repentance, John prepared the way to know Christ. That’s what was declared by John when he said, “I did not know Him; but that He should be revealed to Israel, therefore I came baptizing with water…and I have seen and testified that this is the Son of God” (John 1:31,34). And still repentance is the only way for us to know Christ. If we do not examine ourselves, we will never feel our need to Christ. And if we do not know our sins, we will not know the value of salvation.

Those who were baptized declared their sins, seeking the kingdom of God. So they reached it with joy and purity of heart. That is why Jesus taught them once, “But blessed are your eyes, for they see, and your ears for they hear; for assuredly I say to you that many prophets and righteous men desire to see what you see, and did not see and to hear what you hear, and did not hear” (Matthew 13:16,17). “And when all the people heard Him, even the tax collectors justified God, having been baptized with the baptism of John. But the Pharisees and lawyers rejected the will of God for themselves, not having been baptized by him” (Luke 7:29). That’s how it is always. Those who are proud with their righteousness and who rely on their own thinking reject the will of God for their salvation.

The Baptism of Jesus Christ

John was baptizing in the Jordan River, 30 miles away from Nazareth. It was winter when Jesus came to be baptized. John didn’t know Him, but he was prepared to meet Him. As soon as Jesus appeared in front of him, John felt His glory which made him recognize that He is the Messiah. As he saw that He wanted to get baptized, John tried to back away (Matthew 3:13) as he knew the incompatibility of his baptism with the One without sin.

Jesus was baptized after all the people (Luke 3:21). He was not just one of the people but a representative of all of them, and through His baptism, their baptism was complete.

“When he had been baptized, Jesus came up immediately from the water; and behold, the heavens were opened to Him, and He saw the spirit of God descending like a dove and alighting upon Him. And suddenly a voice came from heaven, saying, ‘This is my beloved Son in whom I am well pleased’” (Matthew 3:16-17). The baptism of Jesus shows clearly the truth of the Trinity. That is why this feast is called the Divine Apparition or Theophany.

The Opening of the Heavens

Heavens were shut down in the face of humans when Adam and Eve fell in sin, not just as a punishment but also as an inevitable result for the corruption and death that plagued humanity. On the day when Christ was baptized, the ages of darkness and closed heavens ended and the age of the open heavens started. That is what the Baptist had seen and witnessed. He saw the Holy Spirit alighting upon Him and he heard the voice of the Father from the heavens.

or as St. Mark expressed it, “…the heavens parted” (Mark 1:10). That draws our attention to what Isaiah hoped for when he said, “Oh, that you would rend the heavens! That you would come down!” (Isaiah 64:1).

So many saints have seen the heavens in different times since the baptism of Christ. For example, Stephen, the first martyr “gazed into heaven and saw the glory of God and Jesus standing at the right hand of God” (Acts 7:55). And St. Paul “was caught up to the third heaven…and heard inexpressible words” (2Corinthians 12:2-4). And St. John the Evangelist recorded his vision in a complete book, as much as our language enabled him to.

“Jesus also was baptized and while he prayed, the heaven was opened” (Luke 3:21). Is there a relation between Jesus’ prayer and the heavens being opened? Truly every time we stand in the altar praying, we are counted with those standing in heaven as we pray in the third hour. The church is the house of God and the Eucharist is an open door to heaven.

The era of heaven being revealed has started as Jesus joined the heavenly with the earthly in His Body on the cross. The opening of heaven and the descent of the Holy Spirit was a sign that it is the fullness of time for God to gather all things in Christ making the greatest reconciliation “having made known to us the mystery of His will, according to His good pleasure which He purposed in Himself, that in the dispensation of the fullness of the times, He might gather together in one, all things in Christ, both which are in heaven and which are on earth in Him. In Him also we have obtained an inheritance” (Ephesians 1:9-11).

Christ stood in the waters of the Jordan River, like Noah’s ark, in the midst of the flood of human sin. In His Body he was reconciling all opposing human instincts like Noah’s who gathered all the animals. And as the return of the dove with the olive branch to Noah was a sign for his deliverance by reaching a new earth, the descent of the Holy Spirit like a dove upon Christ was a sign to our salvation as we were buried and we rose with Him in baptism where we reached the new earth and the new heaven. In baptism we received God’s eternal peace and we became a new creation that is nurtured by the Holy Spirit and reconciled with the Father by His Son.