Christ is the Servant to the Circumcision 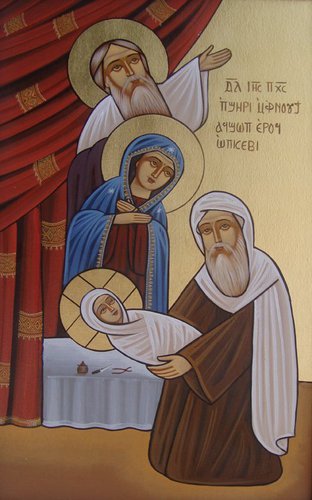 The feast of circumcision is one of the seven minor feasts for the Master. It comes on the eighth day of the birth of Christ, i.e. Toubah 6th / January 14th.

The rite of circumcision:

St. Luke stated that Baby Jesus was circumcised, according to the Jewish tradition, on the eighth day, and was called by the name of Jesus, as he said, “When the eight days were completed for the circumcision of the Child, His name was called Jesus, the name given by the angel before He was conceived in the womb” (Lk2:21). The Giver of Law, the Lord Christ, accepted to submit Himself to the Law of Moses, and to fulfill it personally by His own will in complete humility. He fulfilled all the rite and duties of the Old Testament, not only His circumcision, according to His divine plan, in perfect humility. Therefore, in the Divine Liturgy, we say to Him, “You fulfilled the Law on my behalf”. Thus, He gave us Himself as great example to imitate, for obeying the divine commandments given to us for our benefit.

This rite started when the Lord said to Abraham, “As for you, you shall keep My covenant, you and your descendants after you throughout their generations. This is My covenant which you shall keep, between Me and you and your descendants after you: Every male child among you shall be circumcised; and you shall be circumcised in the flesh of your foreskins, and it shall be a sign of the covenant between Me and you. He who is eight days old among you shall be circumcised; every male child in your generations… and My covenant shall be in your flesh for an everlasting covenant. And the uncircumcised male child, who is not circumcised in the flesh of his foreskin, that person shall be cut off from his people; he has broken My covenant” (Gen17:9-14). Circumcision was the sign of a personal covenant, on the level of the hidden inner relation, between God and every person of His people; and this is why it is called “the covenant of circumcision” (Act7:8). It was very important for a Jew to fulfill this rite because the death of an uncircumcised Jew means eternal rejection from the inheritance of the people of God. Thus, it is a must to fulfill it even unto death. It was prohibited, for example, to practice this rite during the time of the Maccabees because of the pagan authority persecution. At the same time, circumcision was connected, in Moses Law, with celebrating the Passover (Exud12:43-50); as every uncircumcised was not permitted to eat the Passover lamb because he was considered a foreigner to the people of God.

This rite was accompanied with giving a name to the new child. The selected name should match that of a family members to assure the child’s relationship to the people of God; exactly like what happened with John the Baptist at his circumcision, when his relatives wanted to call him “Zachariah” after his father (Lk1:59-63).

His name is Jesus

After almost 700 years, Isaiah’s prophecy was fulfilled, which says, “Listen, O coastlands, to Me, and take heed, you peoples from afar! The Lord has called Me from the womb, from the matrix of My mother He has made mention of My name” (Isa49:1). The angel revealed His name during the annunciation to Virgin Mary saying, “Behold, you will conceive in your womb and bring forth a Son, and shall call His name Jesus” (Lk1:31). He also emphasized that to St. Joseph, declaring that this name is clearly indicating His great mission He will fulfill, by saying, “… for that which is conceived in her is of the Holy Spirit. And she will bring forth a Son, and you shall call His name Jesus, for He will save His people from their sins” (Matt1:20,21).

“Jesus” is the same name “Joshua” in Hebrew, which means “Yahweh saves”. In its Hebrew origin is equal to “Hosea” (Num13:8). The Lord Christ was incarnated and carried this name as the Savior of the whole world (Matt1:21). It wasn’t random that Joshua son of Nun, Moses’ disciple, in the Old Testament was the first person to carry this name, but it was to refer to our Lord Jesus and His leading work that leads us to heavenly Jerusalem, since He led us to pass the Jordan to enjoy the new land and eat the new wheat. Thus what was fulfilled by Joshua for his people, symbolized what will be fulfilled to the children of the kingdom by the Lord Jesus. What Moses failed to fulfill to his people, i.e. to lead them to enter Jerusalem, the Promised Land; was fulfilled by Joshua, indicating that the Law of Moses failed to lead us to heavenly Jerusalem, while this is fulfilled only through Jesus the Savior, who leads us to His eternal kingdom, heavenly Jerusalem.

He was also called before His birth “The Son of God” by the saying of the angel to the Virgin, “therefore, also, that Holy One who is to be born will be called the Son of God” (Lk1:35)… which proves His divinity. Before His birth from the Virgin at the fullness of time, He was begotten from the Father before all ages. He is the eternal Logos, who was incarnated and dwelt in us, and we beheld His glory, as of the only begotten of the Father (Jhn1:1,14).

The spiritual meaning of circumcision

Circumcision was not limited to its significance concerning certain organ of the body, but it exceeds that to a deeper meaning:

To conclude, the action of circumcision extends from the flesh of the body to the heart, conscience, and all the senses, and strengthens to the relation with God. The rite of circumcision, as a spiritual act, refers to getting red of the lustful desires, in general, from the heart, ears and lips; but rather from man as a whole, to be purified, to come near to God, and to be ready to listen to the word of God, uttering it, and testifying for it.

It is clear that the covenant of God, from the beginning, based on purity; visibly in the flesh, and invisibly in the heart and senses, as a preparatory action for the dwelling of God through His Holy Spirit in man to be perfect, according to the divine order, “Walk before Me, and be blameless (perfect)” (Gen17:1), “You shall be perfect, just as your Father in heaven is perfect” (Matt5:48).

As Christ’s death and resurrection were for us, likewise His circumcision also was for us… all mankind were circumcised along with Him. Hence, we have no need at all for a circumcision of the flesh. Therefore St. Paul says, “In Him (in Christ) you were also circumcised with the circumcision made without hands, by putting off the body of the sins of the flesh, by the circumcision of Christ, buried with Him in baptism, in which you also were raised with Him” (Col 2:10,11). Circumcision prefigured the resurrection… since both of them were linked to the eighth day (resurrection’s Sunday followed Saturday, which is the seventh day of the week), and the number eight, in Biblical terminology, represents the new life. Circumcision was a covenant done with blood between God and His people, caused a permanent irremovable sign; and through the sacred baptism, we have a covenant with God by the blood of Christ which cleanses us (1Jhn5:8), and we received the irremovable seal of the Holy Spirit by the Holy Myron. As circumcision was saving practiced person from disobedience of God, punished by eternal death; also through baptism, which is death and resurrection with Christ, we are saved from eternal death.

The pillar of faith, St. Cyril the Great, says, “On the eighth day, Christ rose from the dead and gave us the spiritual circumcision. He then commanded the holy apostles, “Go therefore and make disciples of all nations, baptizing them in the name of the Father and of the Son and of the Holy Spirit”. And we affirm that the spiritual circumcision takes place chiefly in holy baptism, when Christ makes us partakers of the Holy Spirit too. Of this Joshua, that Jesus of Old (testament), who became a leader of the Israelites after Moses, was also a type. He led the children of Israel across the Jordan, then made them stop and immediately circumcised them with knives of stone. So when we have crossed the Jordan (i.e. baptism), Christ circumcised us with the power of the Holy Spirit, not by purifying the flesh, but rather by cutting off the defilement that is in our souls”.

By establishing the sacrament of baptism, the covenant of circumcision in the flesh ended. Through baptism, the spiritual circumcision happens to man, by putting off the body of sin, i.e. the old man, to put on the new man, i.e. Christ, by Him and in Him we became a new creation. Through the Holy Spirit, the entire body is circumcised to become a holy temple for His dwelling. St. Cyril the Great says, “After Jesus circumcision, the rite was abolished by the introduction of baptism, of which circumcision was a type. For this reason, we are no longer circumcised. It seems to me that circumcision achieved three distinct ends. In the first place, it separated the descendants of Abraham by a sort of sign and seal and distinguished them from all other nations. Second, it prefigured in itself the grace and efficacy of divine baptism. Formerly a male who was circumcised was included among the people of God by virtue of that seal; nowadays, a person who is baptized and has formed in himself Christ the seal, becomes a member of God’s adopted family. Third, circumcision is the symbol of the faithful when they are established in grace, as they cut away and mortify the tumultuous rising of carnal pleasures and passions by the sharp surgery of faith and by ascetic labors. They do this not by cutting the body but by purifying the heart. They do this by being circumcised in the spirit and not in the letter. Their praise, as St. Paul testifies, needs not the sentence of any human tribunal, but depends upon the decree from above (Rom2:29)”.

It is clear that baptism replaced circumcision in a way more general and perfect, and with a deeper and effective spiritual influence. Through baptism, we became a new creation as a heavenly rebirth, and we became fellow citizens with the saints and members of the household of God.