He Appeared to Peter

The Lord who knows the weakness of mankind knew that Peter, His enthusiastic and zealous disciple, would betray Him three times within a few minutes in front of a servant girl with other servants, and not in front of dangerous authorities. Thus, He warned him saying, “Simon, Simon! Indeed, Satan has asked for you, that he may sift you as wheat. But I have prayed for you, that your faith should not fail” (Lk 22:31,32). Peter, being self-confident much more than in his weakness, responded saying, “Lord, I am ready to go with you, both to prison and to death” (Lk 22:33). He was confident in himself, in his love to God, in his steadfastness, and that he was the most steadfast among all the disciples. Therefore, he argued with the Lord when He said, “Assuredly, I say to you that today, even this night, before the rooster crows twice, you will deny Me three times”. But he spoke more vehemently, “If I have to die with You, I will not deny You!”… and they all said likewise (Mk 14:30,31; Matt 26:34,35).

Maybe Peter thought that denying Christ is impossible for him, or may be, through humility, he may think that he could fall in other sins - but not this one, he did not believe that he could reach this level. Who could think that this great saint could deny Him? He who was praised by the Lord when he declared the divinity of Christ by saying, “You are the Christ, the Son of the living God” (Matt 16:17-19); received the authority of binding and loosing sin as one of the twelve (Matt 18:18); was considered as one of the pillars of the church (Gal 2:9); who was full of zeal and enthusiasm, who cut the ear of the high priest’s servant to defend Christ a while ago (Jn 18:10)… Could he deny Christ?! If this saint denied, shouldn’t we humble ourselves?! Shouldn’t we feel that we are not stronger than those who fell and be watchful? If there were times we didn’t fall it was because God was and is always supporting us, so we should realize that it wasn’t because of our personal power, capabilities and resistance. Let us say with the Psalmist. “If it had not been the Lord who was on our side… then they would have swallowed us alive… Blessed be the Lord, who has not given us as prey to their teeth” (Ps 124:1,2,6).

His Holiness Pope Kyrillos the 6th wrote to one of his spiritual sons saying:

As a horse got a bridle, the body also has to overcome its lusts and pleasures. This is what the apostle says, “I say then: Walk in the Spirit, and you shall not fulfill the lust of the flesh. For the flesh lusts against the Spirit, and the Spirit against the flesh; and these are contrary to one another, so that you do not do the things that you wish. But if the Spirit leads you, you are not under the law. Now the works of the flesh are evident, which are: adultery, fornication, uncleanness, lewdness, idolatry, sorcery, hatred, contentions, jealousies, outbursts of wrath, selfish ambitions, dissensions, heresies, envy, murders, drunkenness, revelries, and the like; of which I tell you beforehand, just as I also told you in time past, that those who practice such things will not inherit the kingdom of God. But the fruit of the Spirit is love, joy, peace, longsuffering, kindness, goodness, faithfulness, gentleness, self-control. Against such there is no law. And those who are Christ's have crucified the flesh with its passions and desires. If we live in the Spirit, let us also walk in the Spirit. Let us not become conceited, provoking one another, envying one another.” (Gal. 5:16-24)

The appearance at the sea of Tiberias

The location: The sea of Tiberias

The witnesses of the appearance

They were seven disciples... five of them were known, and were among the twelve. St. John mentioned Peter with Thomas first, and then he mentioned himself and his brother in a way that shows self-denial "the sons of Zebedee", at the end of the list after Nathanael.

How to Prepare a Sermon

Many of us are servants in our churches or from time to time are asked to prepare a lesson for a Sunday School class or a youth meeting or any of the many activities in our church. The question than becomes, “How can I prepare something that will benefit my audience, attract and keep their attention, and will be something that they can remember and reference later on?” To answer this question, we will look at the example of one of the most famous sermons recorded in the Bible-the sermon of St. Stephen before his martyrdom.

St. Stephen was a man of great character. He is described in the book of Acts as a man “Full of faith and the Holy Spirit.” In fact, while he was just beginning his sermon, the people who were listening to him compared his face to that of an angel. St. Stephen most likely had no time to prepare for this sermon because he was dragged into the streets for his impromptu trial, but because he was filled with faith and the Holy Spirit, his words were strong. 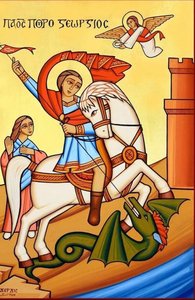 He was born in the year 280 AD in Cappadocia in Palestine, of noble, Christian, God-loving parents. His father Anastasious was a rich prince governing the province in God's fear. He took care of those who were in need. His mother's name was Theobesty. God gave them that saint after his two sisters, Kasieh and Madrouta. They raised him in a Christian upbringing, and he was nurtured on virtues and courage. His father died when he was 14 years old. Another prince took over all the cities of Palestine, and he was a righteous man. So his mother moved with her kids from Cappadocia to Diospolis, where she was originally from and where her possessions were.

St. George joined in the army. His reputation was spread out that the prince wanted him to marry his only daughter. And that's why he sent him first to the Emperor Diocletian accompanied by a hundred soldiers to show the Emperor his courage, and to have his name written in the annals of the kingdom. The Emperor gave him the title "Prince", and arranged for him 500 soldiers, and he generously gave him a lot of presents. Then St. George returned to his province; and the prince assigned to him his possessions after his departure. He did that in a party that he had for his daughter and St. George.