St. Mary - A Life of Humility 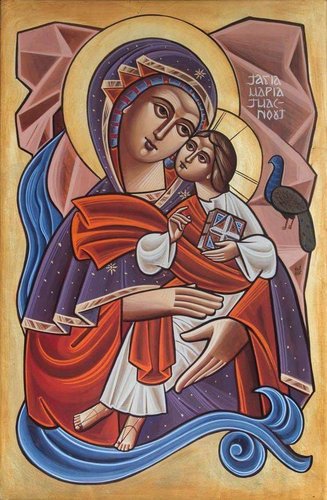 Humility is the amazing and beautiful robe, which our Lord put on; through it, He manifested Himself to us. It was not possible for earthly people to see the Lord of lords and God of gods in the glory of His divinity, but only through humility.

In the past, He said to His elect prophet, "You cannot see My face; for no man can see Me, and live." (Exodus 33:20) When He descended with His glory on Mount Sinai in the past, the mountain was blazing in a fiery smoke; it was the case that, "Whoever touches the mountain shall surely be stoned or shot with an arrow, whether man or beast." (Exodus 19:12, 13) So terrifying was the sight that Moses said, "I am exceedingly afraid and trembling." (Heb.12:18-21)

In the New Testament, God incarnate and became man through His dwelling in St. Mary's womb. She carried Him by her hands, and He ate and drank with man. Moreover, He offered Himself to us as food, indeed, so that we would abide in Him and He in us.

Sts. Augustine and Eronimos noted that the Lord Jesus started His sermon on the mount by talking about humility saying, "Blessed are the poor in spirit [the humble]." (Matt. 5:3) Thus, He started His ministry with the subject of humility and continued in it all His life to His death.

The first sin, which resulted in the fall of our race was the sin of pride; and no wonder we see God addresses it with the virtue of humility.

St. Mary and Her Life of Humility

Throughout her life, St. Mary was known for her many virtues, especially the virtue of humility. Her humility was the key virtue that won her favor with God such that He chose her to be His mother. She declared this herself in her famous praise, "For He has regarded the lowly state of His maidservant." (Lk. 1:48)

H.H. Pope Shenouda III is saying about her humility, "When God wanted to chose a girl to dwell in her womb, He chose one full of humility, so that she would be able to receive the glory and honor rightly due her, while keeping the appropriate balance because of her humility."

St. Mary was such a humble person that she was not affected by the honor, visions and revelations she received. In contrast, St. Paul received from the Lord a "thorn in the flesh" to protect him from pride and exaltation, "And lest I be exalted above measure by the abundance of the revelations, a thorn in the flesh was given to me … lest I be exalted above measure." (2 Cor. 12:7)

Illustrations of Her Humility

The Greatness of the Virtue of Humility

St. Pachomious, the founder of Coenobitic monasticism, said, "Seeing somebody through the eyes of a humble and pure heart is better than any vision, because through him, you see God the unseen."

Once, a monk said to St. Timothy the Hermit, "I find that my mind is always with God." The saint replied, "Better still is to see yourself below all creation as there is no fall from humility."

Once St. Macarius the Great was asked, "Which is the greatest virtue?" He replied, "If pride is considered the worst of all vices, to the extent that it cast a host of angels out of heaven, no doubt humility is the greatest of all virtues, because it is able to elevate the humble, even if he is a sinner."

What Does Humility Do?

How Do We Obtain Humility?