The Christ of the Samaritan Woman 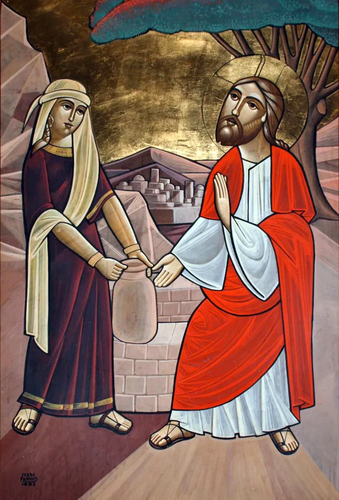 The relationship between Jews and Samaritans was characterized by hatred and enmity, even until the point of death. The reason for this is rooted in the Jews' pride and arrogance towards the Samaritans, because the latter married from the Gentile pagans in the post exilic period. This led the Jews to sever all ties and contact with them. This enmity started at the time of Nehemiah and Ezra the priest who refused to let them help in rebuilding the temple or even in worshiping with them. This led the Samaritans to building another temple on Mount Gerizim in 409 BC.

During the time of Christ, the Samaritans refused to receive Christ in their city. (Luke 9:52-56) However, Christ planned to meet with them by way of His meeting with the Samaritan woman. Thus, He spent some days with them eating and drinking, talking with them and showing them His gentleness and compassion, which ultimately led them to believing in Him and bearing testimony that He is the Savior of the world.

His meeting with the Samaritan woman was a compulsory event driven by His abundant love and intention to achieve the salvation of every soul. He had this meeting regardless of any cost or obstacle set before Him, "He needed to go through Samaria" (Jn 4:4) in the same way it was necessary to spend a day at Zacchaeus' house, "Zacchaeus, make haste and come down, for today I must stay at your house." (Lk 19:5)

He paid the price of this meeting being weary from His journey walking for six hours, becoming thirsty and meeting with the Samaritan woman at the well, even though the Jews had no dealings with them. (Jn. 4:9)

It is out of God's divine providential plan that He seeks the salvation of each of us, exactly like the loving father, having compassion on his lost (prodigal) son, ran to him restoring him to his first rank without any blame or accusation. (Lk. 15:11-32) As a good shepherd, He searches for the lost sheep to restore them. (Lk. 15:4-7) He also went to the paralyzed man at the pool of Bethesda to heal him (Jn. 5:1-9) and created two eyes for the man born blind. (Jn. 9:1-7) This is exactly what happened in the beginning when God sought Adam after his fall asking him, "Adam, where are you?" (Gen. 3:9) He is searching for you, regardless of the cost. He asks about you when you leave Him saying, "Where are you?"

He deals with everyone using a specific approach suitable to him and at the proper time for him. This is clear when we see Him at the proper time and place suitable for the Samaritan woman. He dealt with her using the most suitable approach for her, i.e., asking for her help, as if He was in need of her, "Give Me a drink." (Jn. 4:7) This is marvelous to see – God, who is able to provide for all of our needs, (gives everyone in need to something we have and can give it to Him,) provides for the Samaritan woman by suppressing His ability to take water Himself and asks it from her. And if we respond to Him, as she did, He will give us great gifts – His living water, which does not end, but springs up into everlasting life (Jn. 4:14) exactly as He did with that Samaritan woman. We notice that His approach differs between the Samaritan woman and the Canaanite woman, (Mt. 15:21-28) the lost younger son and the older son, (Lk. 15:11-32) and between Matthew the tax collector (Lk. 5:27-32) and Zacchaeus the chief tax collector. (Lk. 19:1-10) He always deals with you using an approach suitable for you and at the most suitable time for your salvation. The most important thing for us to do is to be ready for Him without excuses – do not be busy with things other than Him.

The objective of our Lord Jesus behind His speech with that woman was to lead her to confess her sins and repent, to know Him and to realize her need for Him as the only source of all spiritual gifts and blessings. This led Him to be patient with her, tolerating her arguments and slow understanding, until He led her from just asking for earthly and material things to seeking heavenly gifts, from living a sinful life to the life of purity and righteousness and from slavery to old beliefs to becoming a true worshiper of God in Spirit and truth. She proclaimed her faith, believing in Him and she became the first preacher to Samaria, leading them also to believe in Him.

What a wonderful comparison we can draw between what happened at the well of Jacob and what happened at the mount of Golgotha. Both are very similar, the events both taking place at mid-day on the sixth hour. We see Jesus tired, suffering because of sinful man, thirsty, asking for a drink and alone, His disciples away from Him. In both events, He didn't drink, because His thirst was for the salvation of every soul. And those who came to Him were satisfied from His living water and blood that came out from His pierced side to give eternal life. At mid-day He meets with sinners and at His second coming, where He will come for Judgment – He will come at midnight.

Our Christ is the Christ of sinners and those rejected. He is the Christ of the rejected Samaritan woman and of the foreigner Canaanite woman as well as of the prodigal son and the man born blind. He is the Christ of all, who cares about all, especially those who have no helper. He cares about you personally, regardless of your situation – how long you spent astray from Him, how many sins you committed, etc.. He stands by you even when you are rejected by all or if you feel that you are isolated. He will not lose hope in your salvation, even if you do.

Christ showed compassion on Samaria and the Samaritans many times besides this event, revealing the spirit of forgiveness, gentleness, love and compassion for those who rejected Him and those who were rejected. He rebuked His disciples John and James when they suggested sending fire down from heaven to consume the Samaritans since they rejected Him, just as Elijah did. (Lk. 9:52-56) He declared to them that He didn't come to destroy men's lives but to save them. He praised the Samaritan leper who was cleansed among ten lepers (Lk. 17:11-19) because he was the only one who returned and with a loud voice glorified God and fell down on his face at Jesus' feet, giving Him thanks. Indirectly, through praising this Samaritan, Jesus declares the difference between the Samaritans and the unthankful Jews who went astray from God. What a great honor and praise offered to these people by our Lord when He used the title "good Samaritan" to describe that man whose love exceeds that of the priest and Levi, referring to Himself. (Lk. 10:25-37)

Samaria, which was hated by the Jewish nation, became the safe shelter for the early Christians (Acts 8:1) due to the earlier visit of our Lord Jesus to it to sow the seed of the kingdom in it. St. John was the only evangelist who declared the secret of the growth of that seed among them starting with that woman. As He was the person who asked for the destruction of this people, he became the first one to lay His hands over them to receive the Holy Spirit. (Acts 8:14-17)