He Was Lost And Now Is Found 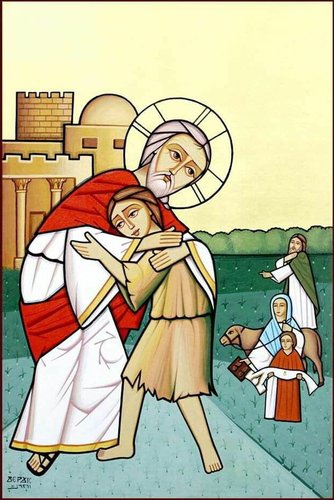 It is very better for a man not to sin, and if he sinned, he should repent quickly for his sins to be forgiven as God gave us his promise, as the Prophet said “For I have kept the ways of the LORD, and have not wickedly departed from my God. For all his ordinances were before me and his statutes I did not put away from me.” (Psalms 18:21-22)

But if one insists on committing the sin and does not repent, he can not escape from perishing as the Lord said, “I tell you, No; but unless you repent you will all likewise perish“ (Luke 13:5)

God loves you and he wants you to live, not to perish.

The Lord Jesus Christ gave us that parable (Luke 15-11:32) as a strong example for repentance of the lost son, and a good example for the great love of the kind father.

The son who left his father’s house is an example of those who leave God and His house, he traveled to a far village where he spent all his money in a loose living, and he began to be in want, and was sent into the fields to feed swine and he would gladly have fed on the pods that the swine ate; and no one gave him anything. All that happened because of sin and for being away from God.

When that son felt how bad his shape was, he decided to go back to his father, apologize and ask for his forgiveness, as an example for repentance and its practical way of doing it.

But how did the story of his repentance start? That story that was worthy to be recorded in the Bible from the Lord himself.

The story started when he sat down one day and looked at himself and thought about his life and his condition in that time, and what he lost with his bad behavior, and he realized the sad fact, the fact that servants at his father’s house are in better situation than him.

But just realizing his bad situation, and that servants in his father’s house are living better than him saved him from starving to death? No! It has to be a way, that way was “Father, I have sinned against heaven and before you; I am no longer worthy to be called your son; treat me as one of your hired servants.” (Luke 15:17-19) Then he immediately did what he decided as the Bible says, “And he arose and came to his father” (Luke 15:20) and he started a new life and had peace with his father.

Truly if that son did not sit down with himself during that decisive moment, he would have never come to his father and repented and gotten his position back.

The Kind and Loving Father

But while he was still at a distance, his father saw him and had compassion for him, these words illustrate how the father was waiting. The father with his compassion is waiting for the return of his son, who left him without sorrow and asked for his share in property and money without any right.

If this is the case of an earthly father, who is human and not perfect, imagine then the compassion of the heavenly Father toward his children? He is the one who reproved us in the bible saying, “If you then, who are evil, know how to give good gifts to your children, how much more will your Father who is in heaven give good things to those who ask him!” (Mat 7:11)

And what was the reaction of the father when he saw his son? “He had compassion, and ran and embraced him and kissed him.” (Luke 15:20) All that from the father before his son even said a word of apology to his father or even without a proof that he regretted his actions.

All these steps from the father did not suite his position and age. Was it not more appropriate for the son to run to his father? But the father’s love forgets all sins and does not remember the insult.

If this earthly father did show this much love towards his son who did all kinds of mistakes, what about the love of the heavenly father toward his children who have been captured by the devil to do his will. The devil who captured them and tied them with the ties of darkness, and humiliate them under his control. Does not the Father feel compassion toward them, and loosen their bondage to sin, and liberate them from the slavery of darkness and give them his Heavenly Fatherhood. Doesn’t he do that and he is the one who said with his pure mouth, “Those who are well have no need of a physician, but those who are sick. Go and learn what this means, 'I desire mercy, and not sacrifice.' For I came not to call the righteous, but sinners.” (Math 9:12-13)

Let us now see the last stage of the repentance of the lost child, the son who was committed to confess his sin to his father asking him for forgiveness for what he did and asking his father to consider him as one of his servants not as a son to him because he is not worthy for being a son.

When he met with his father, he started to say these words but the father interrupted him and did not let him say the phrase “make me as one of your servants” as he also did not rebuke him, or reprove him for what he did even in a nice way, but he kissed him and accept him as he is.

We do not lose our childhood to our Father no matter what sins we do, He always accepts us as his children, not as servants when we return to him with regret and sorrow; this is why our Holy church does not repeat the Baptism, by which we got our childhood to God, after we regret our sin, whatever that sin is.

That is why we do not need to ever forget that we are the children of God whom he adopted, and sacrificed his blood as a price for our salvation and our childhood to him. “You know that you were ransomed from the futile ways inherited from your fathers, not with perishable things such as silver or gold, but with the precious blood of Christ, like that of a lamb without blemish or spot.” (1 Pet 18-19)

Your Soul is very precious to God, because of the precious price he paid for it. We should not lose our souls for a temporary pleasure, or earthly lust, or possessions as the Lord said, “For what will it profit a man, if he gains the whole world and forfeits his life? Or what shall a man give in return for his life?” (Math 16:26)

We always remember our childhood to our father and his fatherhood to us when we pray saying, “Our father who art in Heaven” as our Lord taught us to pray.

As the son offered his regrets and repentance to his father, his kind father offered him a suite to cover his body, a ring to rule with him in the house, shoes in his feet as a master (for slaves do not wear shoes) and offered him fatted calf to eat and celebrate as a symbol of sharing the Holy feast and partaking of his Holy Body and Blood. That is what repentance does. Sin makes us naked “Then the eyes of both were opened, and they knew that they were naked; and they sewed fig leaves together and made themselves aprons.” (Gen. 3:7) but repentance dresses us with the dress of righteousness.

The merciful God is waiting for our return to Him.

The son only offered his father feelings, illustrated in words, but the Father replied with his great blessings, This is what happens also with our relationship towards our heavenly Father, we got nothing to offer but our feelings which we offer to Him through words and He accepts us and he makes us rich with his blessings, and grants us from his spiritual gifts and Holy talents instead of what we lost because of sin.

We can say with confidence and assurance that we live now in the time of abundance of mercy, the mercy that bears insults, shame, and suffering even unto death. Let us come to Him, repenting and regretting, confessing our sins and trusting that he is still opening his arms calling everyone, as He promised, “Come to me, all who labor and are heavy laden, and I will give you rest” (Math 11:28) “All that the Father gives me will come to me; and him who comes to me I will not cast out” (John 6:37)

He is ready to forget our sins, blot out our transgressions, and disregard our ignorance, and put them away for ever, “Who is a God like thee, pardoning iniquity and passing over transgression for the remnant of his inheritance? He does not retain his anger for ever because he delights in steadfast love. He will again have compassion upon us; he will tread our iniquities under foot. You wilt cast all our sins into the depths of the sea.” (Micah 7:18-19)