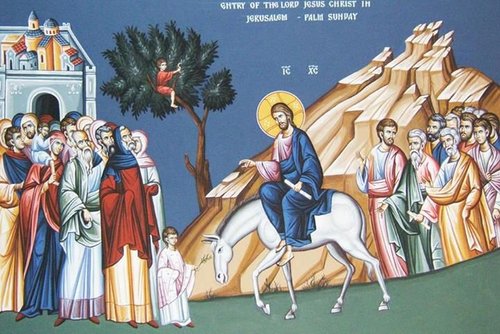 On Palm Sunday, our Lord Jesus Christ entered Jerusalem as a King. Since He was not competing with Caesar, He didn’t encounter any resistance from the Romans. The problems rose internally from His people, the Jewish leaders. There was a problem in understanding the nature of His kingdom.

The nature of the Lord’s kingdom

The Lord Christ accepted to enter Jerusalem as a King. His kingdom was near by. The day, when He conquers Satan’s kingdom by His crucifixion was close. The Lord wanted a spiritual kingdom, but the Jews wanted an earthly kingdom. He wanted to establish a spiritual kingdom based on love. The Jews wanted a kingdom like the other earthly kingdoms, based on authority of the ruler like Samson or Gideon or Joshua. They also wanted the external appearance of force expressed in armed forces. They never thought of a Godly kingdom. They shouted “Hosanna the Son of David”, that is to say, “O Son of David, save us”. They requested a son of David as an heir to the throne and crown of David, not the Son of God.

He wanted to save them from their iniquities, hence His name is “Jesus” or “Savior” (Mat 1:2), but they wanted salvation from the Romans. He wanted to free them from the slavery to Satan and sins, which is bitterer than the slavery to the Romans. Slavery to Caesar is limited to this earthly life, while slavery to Satan destroys man’s eternity. He wanted to reign on the heart; they wanted Him to reign on a physical throne. They never thought of what He told them, “Therefore if the Son makes you free, you shall be free indeed” (John 8:36). Both sides where destined for a confrontation of His and their thoughts.

The simple and softhearted rejoiced by His entry because He was humble (Zechariah 9:9). The entire city trembled (Mat 21:10). They showed their emotions by spreading their garments under His feet and held palm branches. On the other side of the picture, there were people who were not very enthusiastic about His entry. The Pharisees, scribes and priests considered Him a threat to their authority and prestige. His entry was their worst nightmare. The world had gone after him (John 12:19). They ended up hating, conspiring and, at the end, killing their own Savior.

That is awkward; what is wrong if the whole world followed Him? Isn’t He the One who St. John the Baptist wished to see; and when he saw Him, he rejoiced (John 3:29).

The leaders of the Jews, at that time, did not have the same heart of St. John. They even did not accept his baptism (Luke 20:3, 7). Their ego leads them to be addicted to the admiration of the multitudes, lie, compete, hate, and conspire to kill the Messiah. When the Lord Jesus entered Jerusalem as a King, they refused His stretched hands; and shouted later “No king but Caesar”! Wasn’t Caesar the same one whom they were trying to break his yoke through the Messiah?!

They did not harm the Lord, but themselves. The Lord laid the foundation of the kingdom, from which they exclude themselves. They were very busy with their conspiracies and collaboration with false witnesses. All their evil doing didn’t prevent the kingdom of Christ.

At this moment in time, what are your thoughts? Will you plead saying to David the king, “All the earth shall worship you and sing praises to You” (Ps 66:4)? Will you work and ask for help to push back all what prevent His kingdom into your heart? Cast away the ego, jealousy and pride.

The Lord Jesus as the King

We all confess Jesus Christ is the King. He didn’t refuse the kingdom in general, only the earthly one. He refused the throne that was given to Him by men (John 5:41, 6:55). He also refused the kingdom offered to Him by the ruler of this world and its leader (Mat 4:8). The book of revelation describes our Lord as the King of kings (Rev 19:16). Daniel also described His authority to be forever (Daniel 7:14). At His birth, the three wise men, who visited Him, were looking for a King (Mat 2:2). Even before that, Archangel Gabriel described Him as the King who will reign on the throne of His father David (Luke 1:32, 33).

The royalty of both our Lord Jesus Christ and King David were very similar. David was anointed a king a long time before his enthronement; so was our Lord (Heb 1). David was enthroned after the defeat of Saul, so was our Lord who was enthroned after He defeated Satan on the cross on our behalf (Psalm 95). The thief crucified on His side bare witness to His royalty and divinity when he shouted saying “Lord, remember me when You come into Your kingdom” (Luke 23:42)!

The Coptic Orthodox Church calls the Lord Jesus Christ, the King of peace. At the eastern side of the churches, the icon of the Lord represents Him sitting on His throne surrounded with the four non corporeal creatures; symbolizing the four gospels.

Starting by Palm Sunday, the Lord began practicing His authority as a King; and that was manifested by cleansing the temple and by changing the religious leadership. When the Lord expelled the money traders and animal sellers, it showed us how to be perfect. While He was softhearted and passionate with the broken hearts, He was firm and ready to use the whip with the trespassers and offenders if they did not return from their bad ways. He was like a doctor who uses surgery, if the less invasive measures fail. On that day, the priests, Pharisees and scribes were unable to confront Him. They were afraid from the people! The only thing they did was to ask Him about his authority. The Lord declared that they do not need an answer for their questions but rather to think back to the point where they went astray? He asked them about their belief regarding the baptism of St. John.

The Lord Christ was in the process of changing the existing leaders. He wanted a leadership, which understands His kingdom in a spiritual way. He looked for a leadership that would not mislead His flock. Also, the change was an indication that the symbols of the bloody sacrifices would be fulfilled in His sacrifice. In the new order, a nation or a tribe will not monopolize the priesthood. In His last week on earth, the Lord had to push the new church to the front of the picture. After several warnings to the Jewish priesthood, He gave the final blow through the parable of the evil vinedressers (Mat 21:33-44). He ended it with: "Therefore I tell you that the kingdom of God will be taken from you and given to people who will produce its fruits”. The priests did not repent or try to evaluate the new threat in a different mentality than before. In contrary, they looked for a way to arrest Him. One day after that, they began conspiring with Judas to betray Him.

Similarly, He tolerated the Pharisees, the scribes and the lawyers, for more than three years to gain them in His kingdom, but when they rejected His invitation, He found no other choice but to remove their false cover of piety and to discredit them as leaders, as mentioned in (Mat 23).

Finally, I should ask myself, am I an evil vinedresser? Is my service accepted? Am I resisting or accepting the Lord’s action to cleanse my heart? Does my ego block the light from the Lord?

Let us sing with Christ, “My house shall be called a house of prayer”.